History of the Wyckoff Police Department

In 1946 Herbert G. Vance, one of the original part time uniformed officers, was appointed Police Chief. Another officer was appointed to the Department as a full time patrolman, and Thomas Norman was promoted to Sergeant. The department at the present time was manned as follows: Commissioner of Police, Chief of Police, Sergeant, Patrolman, and two desk officers. All were full time paid men with the exception of the Police Commissioner who was a member of the Township Committee. There were eight part time uniformed officers, and nine special police officers.

The Wyckoff Police Department with headquarters located on Franklin Ave was created by ordinance on June 8, 1922. Prior to that time all Police powers were vested in the Township Committee which appointed several Marshalls yearly, and a constable, appointed by the County. Their main function was controlling traffic at Wyckoff and Franklin Avenues.

The first Chief, Albert P. Holt, took office on July 13, 1922, and resigned one month later. Thomas B. Young, the next appointee, served until 1926, when James L. Morrison became Chief. George S. Gallant held the office from February 1929 until his resignation in 1932. During the time periods between appointments, the Chairmen of the Township Committee assumed temporary control of the department.

In 1930, a special township ordinance was created to employ one full time paid Police Officer, Thomas Norman. In 1937, the Township Committee passed another resolution, making Police Chief William Williamson the second full time paid employee. At this time, the Department now had two full time officers, six part time uniformed officers, and nine special police officers, all of whom are subject to call at any time. 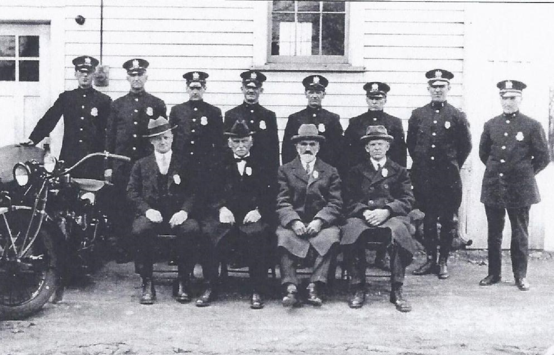 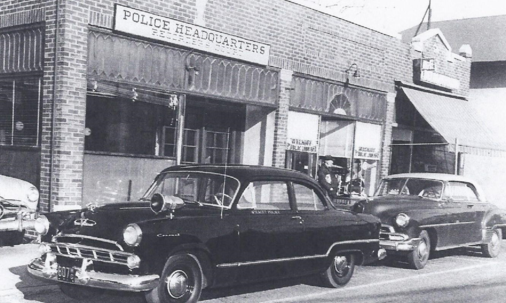 The routines of the Officers varied by day and night shifts. The day officer would control traffic at certain intersections for school children, and on Sundays, direct traffic at both Churches. The night officer would inspect all the stores, banks, and vacant houses, from a list supplied by the desk officer. He was also on the lookout for any lights not burning on the roads.

The efficiency of the Department was greatly enhanced by the acquisition of a modern radio police car which, coupled by patrols from the Local, County, and State Police, assured the township adequate protection. Court was conducted every Wednesday evening by Recorder Walter W. Hartwig at Police Headquarters. Having no jail of its own, Wyckoff would send its prisoners directly to the County Jail in Hackensack, NJ.